Wooden Stake, Crucifix, or Holy Water? How to fight an Emotional Vampire 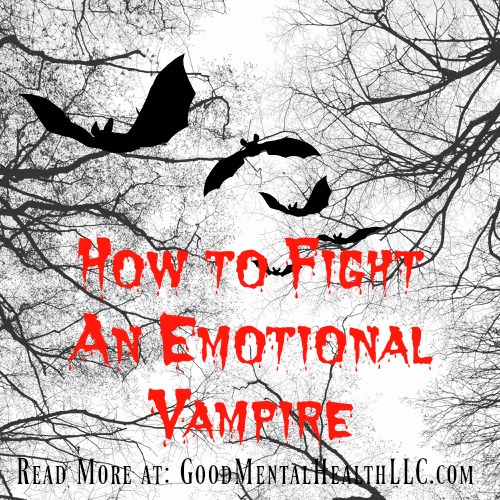 It’s Halloween! What better day to discuss the various monsters in our lives? As all our little ghosts and goblins dress up to trick or treat tonight, the monster I’m thinking of today is the Emotional Vampire.

Instead of sucking your blood, the emotional vampire sucks your life force, your mental energy, your joy, and your positivity. These are the relationships that we find so exhausting, involving people who are so hard to get away from.

What are they? How can we identify them? And better yet, how can we protect ourselves from them?

What is an Emotional Vampire?

Emotional vampires are those people who prey on our emotional energy because they struggle with their own sense of identity. They can’t seem to generate enough positive energy of their own, and instead absorb the energy of those around them.

Feeling a lot of joy in your life? Great! They’ll devour that.

Feeling low and depleted yourself? That’s fine too! They will generate chaos by starting an argument, causing trouble, and generally making you upset so they can get the energetic hit they’re looking for.

Identifying the Emotional Vampires in your life:

Emotional vampires take many forms. They are the self-absorbed narcissists, the pitiful victims, the manipulative controllers, and the chaos-generating drama kings and queens.

An emotional vampire can be the friend who needs your admiration; always the best and the brightest, while your poor mediocre soul lives in their shadow, contemplating your own insignificance.

They might be the woe-is-me victims who have a list of problems a mile long and who won’t consider finding a solution for any of them. Their favorite pastime is complaining and favorite phrase is “yes, but…”

They are the liars by omission, deceiving you by not giving you all the facts, thereby preventing you from making informed decisions about little things (like what you’re having for dinner) to big things (like practicing safe sex with a monogamous partner who actually isn’t.)

Finally, they are the people who are incapable of building you up. When you’re feeling low, tired, or dragged down by life, they one-up you with the story of how bad their day has been; they start an argument; they accuse you of something you haven’t done. They do anything they can to make you upset, generating drama and chaos so they can meet their need to feed off of you emotionally with no regard for the support you need.

Emotional vampires are the people who leave us feeling deflated and defeated, taken-advantage of, overtly and covertly put down, unappreciated, devalued, and sometimes they can leave us questioning our own self-worth.

Identifying an emotional vampire can be difficult because their whole MO is to suck you in- so they can suck you dry- before you even know what hit you.

Almost imperceptibly, their behavior changes, and what was once a good relationship becomes a destructive, parasitic relationship. You become their oxygen, their life-giving energy source, and they begin to act as if they can’t live without you.

(The sad part is that honestly, sometimes they can’t live without you, which is exactly why they don’t want you to get away. Then they will be left searching for a new victim.)

Once you identify the dysfunctional behavior for what it is, you are likely 1. So enmeshed that it’s almost impossible to make a clean break and 2. Becoming weaker by the day, increasing the difficulty of making an escape at all.

The big question is, how do we prevent these entanglements from starting up in the first place? What is our best defense against these types of people?

Healing our own emotional wounds.

Emotional vampires tend to be damaged people who have deep emotional wounds. Instead of healing themselves and becoming emotionally self-sufficient, they feed off of others to meet their own needs.

But if the vampire is the flea, what makes us vulnerable to being the dog?

Codependency is characterized by participation in a dysfunctional, one-sided relationship which meets the emotional needs of both parties. So, if we find ourselves in a relationship with a vampire, what that tells us is that (on some level) their dysfunctional behavior is meeting a need inside of us.

Yup. Let that sink in.

Codependency is a pattern of behavior often learned in childhood. It’s typically seen in family systems where one of the family members is dealing with an addiction, or serious mental or physical health issue, and instead of requiring that family member to take responsibility for their situation and help themselves, the other family members take up the slack, thereby enabling the continuation of dysfunctional behavior.

Children, along with the enabling parent, learn to tiptoe around an abusive or addicted parent on a relentless quest to save them from the consequences of their actions.

After catering to someone else’s needs throughout childhood, we become adults who are conditioned to take on that same role by acting as saviors, heroes, self-serving nurturers, or we become emotional vampire ourselves asking the people around us to provide for our emotional needs because we never learned how to provide for them ourselves.

Break the Cycle. Do the Work.

What can you do to interrupt this dysfunctional pattern? First you must recognize it for what it is. If you find you are in relationships with emotional vampires, either as intimate partners, extended family members, or in your close circle of friends, you must start by recognizing it for what it is: unhealthy for both of you.

Begin by taking a hard look at what feels familiar to you:

Until we heal the old wounds within ourselves that make us vulnerable, we will continue to be targeted for emotional vampirism.

If these qualities and characteristics resonate with you and you would like more information on healing emotional wounds, Read More on that topic here or Contact Us to schedule a counseling or coaching consultation. Let us help you make your relationships as good as they can be!