Why being loving makes us more lovable 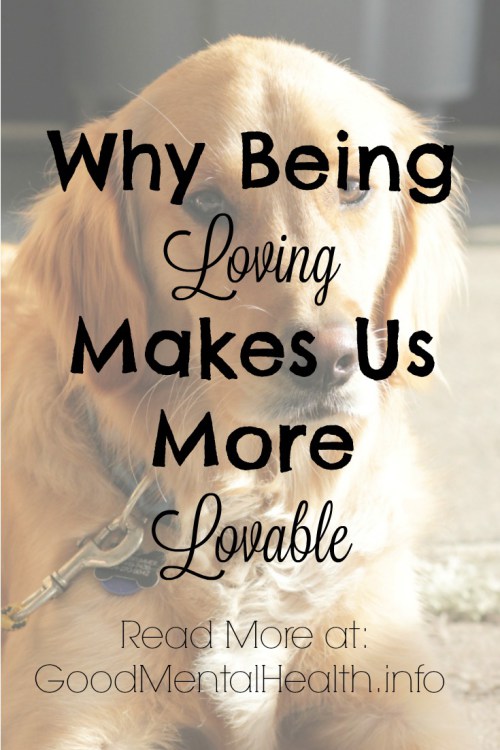 Being loving makes us move lovable

I have a 10 year old yellow Labrador Retriever. We got Decoy when he was between 6 months and a year old. He came from a rescue without a story. He was skinny and hyper, totally untrained and out of control. A couple years later we read in the paper that the rescue he came from was shut down for animal cruelty. The woman in charge had been hoarding dogs, under-feeding them, keeping them in filth.

That had been his life before he came to us. And before he got to the rescue, we can only guess. I’ve always imagined he was tied to a tree and abandoned; starving, unwanted, and unloved. Then, even once rescued, he was still hungry and neglected. A double whammy of pain.

He’s been with us for a decade now and still he’s skittish and untrusting. He doesn’t like to be approached, doesn’t like to be touched. He tries to curl up with me and let me hold him, but he’s stiff and uncomfortable. He turns in circles, scratches me with his nails. He seems to want to cuddle, to be held; but he just doesn’t know how.

In addition to our “mal-adjusted” yellow Lab, we also have a four-year-old Golden Retriever. We got our Golden from a family with a backyard farm. Their male and female Goldens had a litter of pups. Those pups were cared for and handled every day of their lives by both their canine and human families. At an early five and half weeks old, the family let the puppies go to their forever homes-surely too soon by most standards-but not too soon for us. We’ve felt extremely lucky to have had so much time with our baby boy. Our pup has been with us non-stop, loved and cherished and treasured by us, since he was barely a month old.

While he was so young and still eating every few hours, Percy went everywhere with us. I carried him in my shoulder bag into stores and onto restaurant patios. As he got bigger, he rode around in a red wagon so that germs wouldn’t touch his yet un-vaccinated paws. Everyone who saw him touched him, cuddled him, spoke to him, and loved him.

A dog trainer might say, our Golden was socialized while our Lab was not.

But socialization is more than just exposure to random people and experiences.

For a young dog, as well as a young human, socialization involves intentional exposure to healthy, positive, trustworthy people and experiences.

I would say, our Golden was intentionally provided certain experiences which our yellow Lab was not fortunate enough to have, and it has led to remarkably different behavior.

Percy will approach anyone and everyone, expecting to be loved. He has never met a stranger he doesn’t like.
Decoy, on the other hand, keeps his distance. He never gets close to anybody.

Percy wags his tail and walks towards strangers. He expects pets and loves and attention and maybe treats.

Decoy tucks his tail, barks, and backs away, even when the stranger is friendly and kind.

People love Percy, because he’s willing to put himself out there. He makes himself available to be loved by being loving himself.

People are afraid of Decoy because he keeps his distance and defends his boundaries. He never makes himself available to be loved because he isn’t loving.

I think it’s the same for people.

For those of us who learned early in life not to trust, we too become unlovable.

We were born beautiful, trusting, helpless babies who needed love and nurture in order to thrive. But over time, and through our experiences, we learned not to trust. We learned the world wasn’t a safe place; that the people who were supposed to love and protect us hurt us instead. As a result, we began defending our boundaries. Not letting others get too close. We learned to bark and back up, making it impossible for others to get close to us. We act unloving and therefore unlovable.

Or, maybe a better description is: hard to love.

Instead of approaching others with open hearts and minds, expecting the best, expecting love and kindness and respect in return, we approach others more like a rescue dog might.

We want to trust. We want to believe in the goodness of other people. We want to believe that we won’t be hurt, or starved, or abandoned again. So we approach, we sniff, we *think* we’re approaching with open hearts and minds. But then, something sets us off. Triggering an old memory of past abuse, we back up, barking- sometimes snarling- hackles raised.

Friendly turns scary and the person we were attempting to approach just a moment before is now afraid of us.

They back away. They may even say something like, “why keep a dog like that when there are so many good dogs in the world?”

Perpetuating a lifetime of loneliness and misunderstanding.

Human children aren’t so different from my sweet retrievers. A human being who has learned not to trust pushes other people away. Not because they don’t want love, but because they so desperately do.

A child who experiences neglect or physical and emotional abuse may react in much the same way. And that child may then grow into an adult, possibly becoming a parent themselves, who lacks trust, fears rejection, and threatens abandonment.

And then that parent- inadvertently, subconsciously, unintentionally- may do to their child what has been done to them.

Perpetuating the cycle of loneliness and misunderstanding for another generation.

Good Mental Health, LLC is a counseling practice located in St. Johns, Florida, offering individual and family counseling to children, teens, and adults. With sessions available face-to-face and via Skype, we hope to provide the tools and skills necessary to heal past wounds, grow healthy relationships, and build strong families. For more information, read more about us, or contact us here.