Breaking the Silence + Faith in Humanity 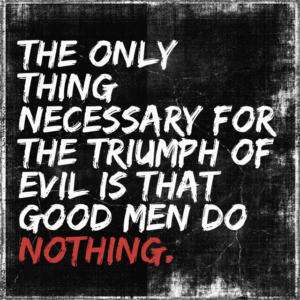 Last year, my son had some problems with the boys at school.

A kid who had been one of his best friends at the beginning of the school year had become his biggest bully by the end. For months, my son came home upset and crying. The kid who was bullying him had singled him out and had all the other boys in his class picking on him too.

Life was feeling pretty bleak. The bullying at school combined with the stalking at home was taking its toll on our family. We were alienated, isolated, and unsupported. We felt so very alone.

It seemed that the entire community had turned turned their backs on us.

And like a wounded fish draws sharks, those who didn’t, decided to kick us while we were down.

Around the end of the school year, an unexpected miracle happened. One of the boys in my son’s class decided to step up and his act of kindness changed my son’s entire outlook. One might say, an eleven-year-old’s very faith in humanity was restored when this boy told him, “if those guys mess with you, I’ve got your back.”

Those words made all the difference.

Instead of standing alone and taking wave after wave of abuse, my son now had someone standing next to him, offering to help him weather the storm.

Don’t get me wrong, nothing happened. There wasn’t a show down in the school yard. No punches were thrown (although I exchanged some pretty harsh words with another mother at the bus stop one day, telling her kid to back off.)

But the change in my son was remarkable. He knew he finally had an ally, and that gave him strength.

My own lesson through all this? Talk, tell, reach out, ask for help.

It’s hard for me because I’ve always handled things on my own.

Didn’t air the dirty laundry in public. Didn’t ask for help. Didn’t tell anyone what was going on.

This experience has changed all that.

I’ve had to reach out, had to ask for help. Had to talk. Had to tell. I was suffocating on my own silence.

And believe me, I know I’m putting it all out there. Once it’s on the internet, it’s there forever.

But it does feel like evil will triumph unless I give good men the chance to do something.

And I want to say thank you. Because so many of you have.

Thank you for anchoring me in reality, being outraged with me, reaffirming that I’m not the crazy one even though I’m in a crazy situation.

Thank you for offering your kind words, your support, your encouragement, and your ideas.

YOU have restored MY faith in humanity too.

immigration trauma is real, even if your experienc